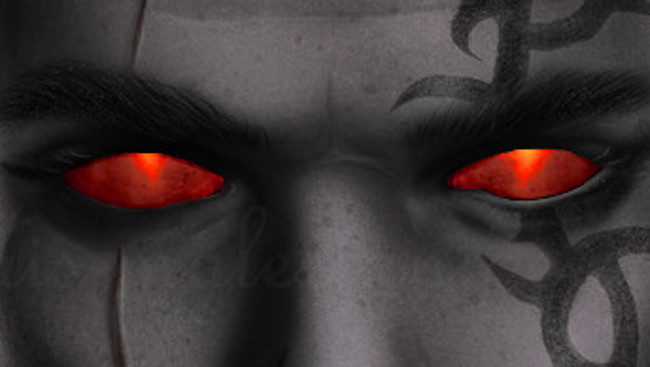 A pair of eyes like blood-coated steel scanned the small, stone chamber. The room was empty except for a shallow, circular pool recessed into the tiled floor. Ripples disturbed the pool’s surface, lapping against the mosaic-adorned ledge that surrounded it.

Amobaylus sniffed the air and frowned, his slate-grey features curling in frustration. His quarry was just here, he was sure of it. Her arcane residue lingered like perfume. A cursory glance revealed no exits from the room, magical or otherwise. How could this be?

With a sudden start he realized that he no longer sensed her at all. For several weeks he had stalked her across Faerun, following a magical beacon conjured by his god’s will. This beacon led him from his home in Calimport, through the arid lands of Calimshan and Amn, northwards to the Sword Coast. Eventually he tracked her to a scattering of ruins just east of Neverwinter Wood. And though the beacon was faint, it had always guided him to his prey.

Now it was gone.

He shook his head. This was an impossibility, no one could elude his god’s hungry gaze. Even if she used magic to transport herself somewhere far away, even another plane, his god would reveal her to him. And then he would simply continue the hunt. But there was no sign of her whatsoever. It was as if she vanished from existence.

Amobaylus’ confusion and frustration abated slightly as a peculiar thought crept into his head. What if it wasn’t a where that she fled to, but a when. He nearly laughed at the absurdity of the idea. If such a thing were even possible it would require incalculable power. At the very least it would take the direct aid of a god or…

He stared into the pool, watching the ripples slowly settle, and realization dawned on him. He knew who was responsible for this trickery, and that knowledge steeled his resolve.

And in that small, stone room before the circular pool, Amobaylus swore an oath: He would complete his god’s task and slay this girl, no matter how long it took.

A Chosen of Bhaal, the Lord of Murder, could live for a very long time.

Enter the Mists of Time…

The Mists of Time Comments

I'm sorry, but we no longer support this web browser. Please upgrade your browser or install Chrome or Firefox to enjoy the full functionality of this site.